Here's an old fashioned New York Egg Cream recipe to make an authentic egg cream-style beverage. And here's the best news: you can enjoy a homemade Egg Cream anytime without having to leave the comfort of your home. Enjoy one today!

What IS a New York Egg Cream? 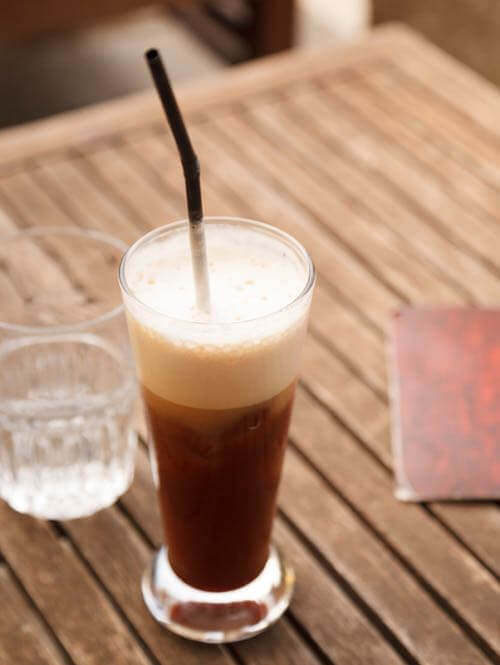 The iconic New York Egg Cream is a unique carbonated soft drink that became famous chiefly in the New York City area in the 1890s. They are still sold in NYC today, but they're scarcely found elsewhere. Why? That's a genuine mystery considering how tasty they are.

The called-for ingredients are simple: whole milk, rich chocolate syrup, and carbonated soda water. However, the secret to making an authentic egg cream lies in how it's prepared. Don't worry, everything is explained below.

These old fashioned soda fountain beverages are so good tasting that you would expect every restaurant in North America to be selling them. They're a delicious symbol of happy bygone days, and they're totally refreshing. You MUST try them!

Ingredients: Use 1/2 cup of milk, 3 to 4 tablespoonfuls of rich chocolate syrup (or to your taste), and 3/4 cup or more of soda water.

The way you make an Egg Cream is very important. Make sure the ingredients have been thoroughly chilled in the refrigerator earlier. Add the chocolate syrup to the bottom of a soda glass and then slowly pour in the milk on top of the chocolate.

Now quickly pour your soda water straight down the center of the glass to generate thick, white foam without letting it foam over the brim. Dispensing from a seltzer bottle or soda fountain generates the best foam.

Next, using a long-handled spoon, carefully stir to mix the milk and chocolate syrup without disturbing the foamy-white head. When you are done, your beverage should consist of a dark-brown mixture topped with 1 to 2 inches or more of pure-white foam that has the appearance of beaten egg white.

It's traditional to drink an Egg Cream immediately, right from the glass, never through a straw. If you use a straw you won't be able to taste the creamy foam along with the chocolate drink, and it won't be an Egg Cream experience.

Purists will argue that a proper New York Egg Cream recipe should call for the chocolate syrup to always be added last. Here's how:

Without disturbing the foamy white head, they suggest using a long-handled spoon to drop the thick chocolate syrup down the side of the soda glass and then gently mix it with the milk.

They say that if the chocolate gets mixed with the milk before the soda water is added, it creates a brown, chocolatey head instead of a frothy white one. Therefore, you must add the chocolate syrup very carefully to avoid disturbing the white foam.

Some fans prefer to use the traditional whipping cream instead of milk in their New York Egg Cream recipe, saying it results in a smoother, richer-tasting drink, similar to those originally served at Louis Auster's candy shop. And if you don't care about the calories, heavy cream does make a richer tasting drink.

Others claim that the traditional Fox's® U-Bet Chocolate Flavor Syrup is the ONLY chocolate syrup to make New York Egg Creams with. However, most admit that you can get almost as good results with any high-quality chocolate beverage syrup.

One thing's for sure, no matter how you choose to make a New York Egg Cream, you'll love trying this unique carbonated beverage. Come on, you owe it to yourself to try one. They are that good! 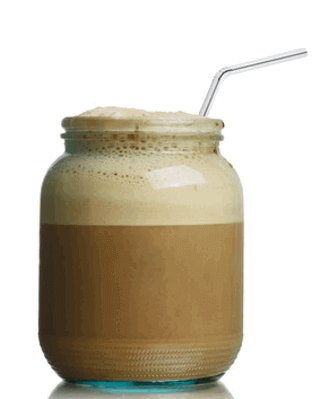 Louis Auster of Brooklyn invented the New York Egg Cream around 1890, and he sold it in his candy shop for three cents a glass. Remember, three cents in those days was a princely sum to most children, when sodas sold for a penny.

Nowadays, they cost over $3, but with the New York Egg Cream recipe presented here, you can make one whenever you want.

What's interesting about these soft drinks is that since World War II they contained neither eggs nor cream. Apparently, the earliest recipes called for a thick, paste-like syrup consisting of eggs, whipping cream, and chocolate fountain syrup.

About 3 or 4 ounces of this thick syrup mixture was spooned into the bottom of a tall, frosty soda glass and then the glass was quickly filled with soda water from a fountain to produce the 2-inch-thick foamy-white head that became identified with a proper Brooklyn Egg Cream.

The egg would have added richness to the flavor of the drink and help to retain its foam. Wartime rationing forced fountain operators to drop the eggs from this remarkable soft drink, and substitute whole milk for the whipping cream.