Old fashioned ice cream soda recipes are easy to make, and you don't need any special equipment. However, there is a SECRET to making them, and I will reveal it below, so you can relish every spoonful of this traditional soda parlor treat.

An Ice Cream Float is also easy to make. Both fountain drinks originate from the days of the old time ice cream parlor, and they taste wonderful each time you make them. 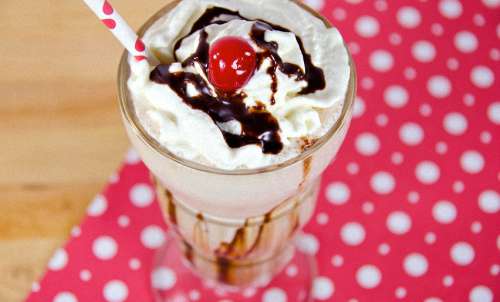 These old fashioned ice cream soda recipes produce what's called a GLORIFIED SODA — that is, they are similar to the standard ice cream sodas in method of mixing and serving, but by the expert combination of flavors employed, they enter the extra-fancy class of beverage. —The Dispenser's Formulary

2 ounces chocolate syrup, scoopful of ice cream, sprig of mint. Crush the mint against the side of glass, add ice cream, and fill glass with carbonated water. Price, 10 cents.

Take a small amount of each fruit in season, cut very fine into a dish, adding enough simple syrup to cover, and let stand for several hours.

In serving put 2 tablespoonfuls of the mixture into a 12-ounce glass, add ice cream and carbonated water as in other crushed fruit drinks. Price 10 cents.

Into a suitable glass place one scoopful of ice cream, 1 ounce of grape syrup, and enough chipped ice; mix thoroughly, strain into a 12-ounce glass and fill with carbonated water, fine stream. Sprinkle with powdered nutmeg or cinnamon.

How to Make Ice Cream Sodas 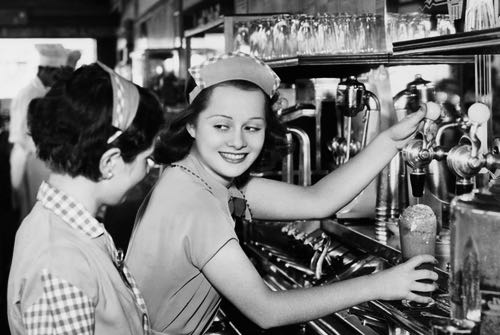 Use my easy step-by-step method to make authentic ice cream sodas. It's based on the original pharmacy soda fountain formula used by soda jerks. Simply follow the easy steps below:

Put two to four tablespoonfuls of flavored soda syrup into a tall frosty soda glass by carefully drizzling it down around the sides of the glass.

Slowly fill the glass with chilled soda water to about 2 inches or so beneath its rim.

Now add a large, round scoop of frozen vanilla ice cream so that it carefully rests directly on the rim of the glass allowing the ice cream and soda water to foam beneath.

Carefully insert a drinking straw and a long-handled spoon between the ice cream and the rim of the glass and top the beverage off with a generous garnish of whipped cream and a red maraschino cherry.

Experiment by combining different soda syrup flavors and your favorite ice creams. Or, make a Glorified Soda by following any of the old fashioned ice cream soda recipes above. There are infinite possibilities — all are delicious!

Did you know that Lou Costello of the classic Abbott and Costello comedy duo really loved his ice cream sodas?

It seems the old fashioned ice cream soda recipe came about by accident at the Philadelphia Exposition in October of 1874. It was there that soda fountain operator Robert M. Green is said to have invented the first ice cream soda.

It became the common practice for 19th-century pharmacists to add an ounce or two of flavored soda syrup — vanilla was the favorite — and a tablespoon of thick cream to soda water to make Cream Sodas, and their soda fountain regulars loved them.

The story goes that one day Mr. Green's stand ran out of fresh cream, so he purchased some vanilla ice cream from a nearby ice cream vendor at the fair.

He planned to let it melt and use it as cream, but he became so busy that he added a large spoonful of the frozen ice cream to his customer's cream soda instead.

It was an instant hit! Word spread throughout the fair, and demand for Green's frosty beverage creation grew so great that his profits were said to have risen from $6 to $600 in a single day! A princely sum in 1874.

And the rest, as they say, is history.