Get Grandma's healthy picnic sandwich recipes and treat your friends and family to an old fashioned picnic they'll talk about for months to come.

These homemade sandwiches make a pleasant change from today's mundane flavors, and they're so easy to make too. They are perfect for outings and for taking to school or the workplace. 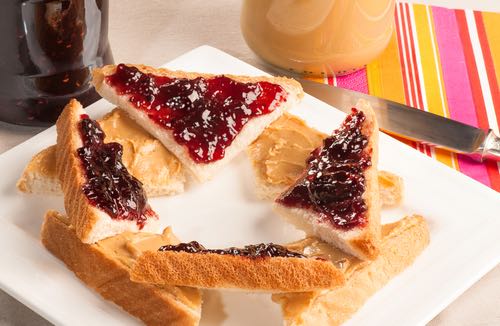 For this healthy picnic sandwich recipe, mix anchovy paste with the yolks of hard-boiled eggs, moisten with thick cream, season with cayenne, and spread between slices of white bread that have been spread with creamed butter.

Trim the slices into uniform shape, free from crust. Lay in a pile and wrap them in waxed paper. Wrap again in a cloth or napkin wet in cold water and again in thick newspaper.

Soften cottage cheese, or cream cheese, with sweet cream, season with salt and paprika, and add an equal amount of roasted and salted peanuts minced fine.

Spread on slices of entire-wheat (whole-wheat) bread that have been trimmed and spread with creamed butter, wrap in waxed paper, then in a cheesecloth wet in cold water, and again in thick paper.

Watercress is today considered a natural super food. It's a crisp and peppery source of healthy vitamins such as C, B1, B6, K, and E. It also contains iodine, iron, manganese, zinc, and potassium, as well as the combination of calcium and magnesium.

Mustard may also be added to this healthy picnic sandwich recipe, if liked.

Spread on slices of buttered white bread, cover with watercress, and again with the bread, trim free from crusts, and wrap in waxed paper. 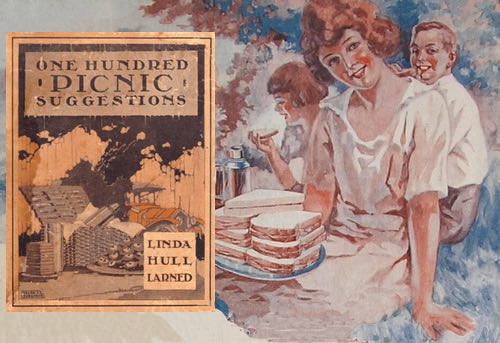 Cover with nasturtium blossoms or watercress, cover with the bread, and wrap in waxed paper.

Cover with the buttered bread, trim, and press together, and wrap in waxed paper. Lobster may be used instead of the crab meat, and canned lobster or crab meat may be used.

Cream 1/2 cup of butter, add 1 cup of grated American cheese and 1/2 cup of pecan or walnut meats minced fine. Dust with salt and paprika and spread on slices of graham or entire wheat bread.

Press one upon the other and wrap in waxed paper, then in a cloth or napkin wet in cold water and again in ordinary paper.

Cream butter, add an equal amount of grated English dairy cheese and chopped pimento. Season with salt and cayenne, and spread on slices of white bread. Put them together and wrap in waxed paper.

Spread on slices of thinly cut white bread, press each two slices together, trim, and wrap in waxed paper.

Melt 3 tablespoons butter slowly, add 4 tablespoons flour, cook until well blended but not oily, add 1 cup of rich milk, a little salt and pepper, 1/2 teaspoon each of mustard and Worcestershire, and 1 cup of grated cheese. When cheese is melted add 1 beaten yolk mixed with 1/4 cup of thick cream.

Cool slightly and spread on buttered white bread slices, cover with chopped hard-boiled eggs, dust with paprika, and cover with another slice of the bread. Trim, press together, and wrap each one separately in waxed paper. 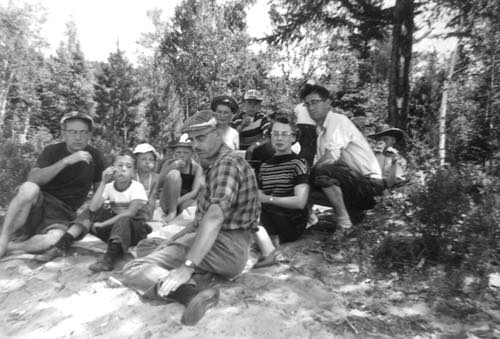 Mince chicken rather fine and add half the amount of minced celery or ham or tongue, or use all chicken. Add a few pimolas minced fine, and moisten well with thick mayonnaise.

Spread white bread with creamed butter, then with the mixture, cover with more of the bread, trim, and wrap in waxed paper, then in a napkin wet in cold water and again in paper.

When making mayonnaise for sandwiches use twice the number of eggs to the usual amount of oil. To 3/4 cup of oil use 2 egg yolks. This makes the dressing very stiff, as it should be for sandwich filling.

For this healthy picnic sandwich recipe, melt slowly 3 tablespoons butter, add 3 tablespoons of flour, and when well blended add 1 cup of thin cream that has been steeped an hour in a double boiler with a seasoning of onion, parsley, celery, and a small piece of mace, and strained.

Season mixture with cayenne or Tabasco sauce, and spread very thick on buttered bread. Cover each slice with another slice of buttered bread, trim, and wrap separately in waxed paper.

Cover with the buttered bread, trim into uniform shapes, wrap each one in waxed paper and put them all together in a damp napkin, and wrap in thick paper.

Slightly brown in butter 2 slices of onion, 3 sprigs of parsley, and a strip of green pepper. Brown the chicken livers in this and cover with chicken stock. Simmer slowly until the livers are tender.

Trim them, cut in small pieces, and press them through a coarse sieve. Season with salt, paprika, a very little mustard, and a little curry powder, or a few drops of onion juice.

Add a few minced pimolas or olives, if at hand, and spread between slices of buttered brown or entire-wheat bread. Wrap in waxed paper.

For this healthy picnic sandwich recipe, add to minced chicken the same amount of minced nuts, moisten with cream, season well with salt and paprika, and spread between slices of entire-wheat bread spread with creamed butter, and serve with a salad. Salted almonds or pecans may be used, also filberts or walnuts. 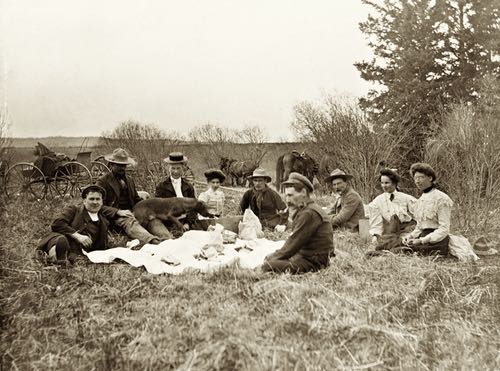 Creaming the butter is better than melting it, as it spreads more easily. Wrap the sandwiches in waxed paper.

To flake canned or fresh crab meat or lobster, add one-fourth the amount of pimento puree (pimento or sweet red peppers pressed through a sieve).

Add mayonnaise and spread between buttered white-bread slices. Paprika and mustard may be added to suit taste. Wrap in waxed paper.

Cover with cold water 1 small onion, 1 green pepper, and 2 tablespoons of parsley, all minced fine, boil until tender, drain and mash, and add to the mashed yolks of 3 hard-boiled eggs.

Cover with very thin slices of cucumber that have laid in French dressing an hour or more, cover with the bread, and wrap in waxed paper.

Broil or saute in butter green peppers cut in strips and scraped free of membranes and seeds, dust with salt and spread them well with butter, and lay the peppers, while hot, between slices of buttered white bread. When cold wrap them in waxed paper and serve with cold meat.

Season with salt and paprika, and add a few drops of tarragon or plain vinegar. Serve with cold meat or with baked beans.

Spread mixture on thin slices of white bread cut from a thick loaf, cover with a slice of entire-wheat bread, also buttered, spread on this a layer of chopped hard-boiled eggs mixed with minced pickle and capers, and a little anchovy paste, cover with another slice of white bread, wrap in cloth, and press under a weight for an hour.

Trim free from crusts and cut through the three layers of bread in thin slices. This may be taken to the picnic before cutting.

You will love this healthy picnic sandwich recipe if you're a liver lover, and even if you're not, give it a try. It's delicious when minced with the hard-boiled egg!

Boil calf's liver until tender, or well-cooked sauteed liver may be used. Trim well and mince fine. Add a third of the amount of hard-boiled eggs, also chopped fine.

Season well with salt, pepper, and paprika, and soften with creamed butter. Minced green peppers and pimentoes or olives may be added, if at hand. Spread on slices of buttered white bread and wrap in waxed paper.

Add a few minced olives or pimolas to peanut butter, or mashed sardines may be used with the peanut butter. Sprinkle with lemon juice, dust with paprika, and spread on slices of buttered white bread, using creamed butter. Wrap in waxed paper.

For this healthy picnic sandwich recipe, use either entire-wheat (whole wheat) or white bread in which seeded and plumped raisins are worked into the dough before the last raising, or use store-bought raisin bread.

Cut the bread as thin as possible (it cannot be cut as thin as white bread on account of the raisins), spread it with creamed butter, dust with finely ground nuts, cover with the buttered bread, trim, and wrap in waxed paper. This may be eaten with salad. 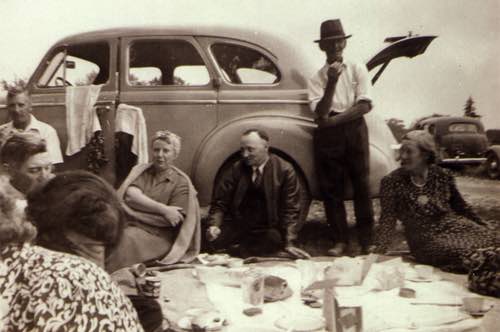 Cover slices of white bread spread with creamed butter, with thin slices of cold roast beef or broiled beefsteak cut across the grain, spread the beef with a layer of horseradish mixed with a little chili sauce, cover with the buttered bread, and trim them free from crust.

Brown or graham bread may be used for the upper slice. The beef may be minced, if desired, and grated onion with salt, celery salt, and paprika used instead of the chili sauce.

Toast lightly thin slices of well-trimmed white bread, when cold spread with tartar sauce, cover with skinned and boned sardines, sprinkle with minced capers, or watercress, and cover with slices of the toast spread with creamed butter.

Wrap separately in waxed paper, then all of them in a wet cloth and in strong paper.

For this savory healthy picnic sandwich recipe, mix equal amounts of minced chicken livers and lobster or shrimps, season with onion juice or grated onion, and pimento, add salt and mix with mayonnaise and spread on buttered white bread.

Cover with slices of entire-wheat bread also buttered, press and trim, and wrap in waxed paper.

Spread between buttered slices of white bread. Cooked dressing or mayonnaise may be used instead of the creamed butter if the sandwiches are not to be served with salad. Wrap in waxed paper.

Looking for something versatile? Any conserve or marmalade may be used with minced nuts and spread between slices of buttered bread. Both white and entire-wheat or Graham bread may be used.

Jellies may be mixed with cream or cottage cheese and spread between buttered crackers. The butter for spreading should always be creamed. Wrap in waxed paper.

When you have leftover sandwiches after a picnic or party, you can use them in the following casserole dish:

Mince the sandwiches in a food processor, mix with a good well-seasoned gravy, put in a pie plate and cover with creamy mashed potato about an inch thick.

This, baked in 400°F oven about 30 minutes or until the potato topping is golden brown, makes a delicious luncheon dish. 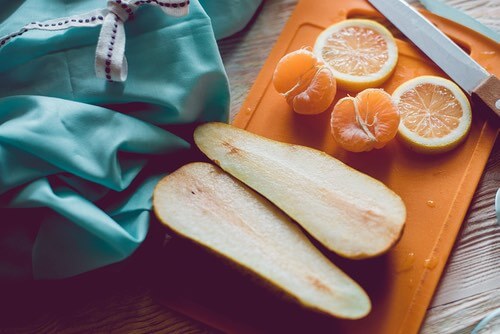 Fresh fruits in season are so easy to carry on picnics and make the perfect dessert after a tasty lunch of homemade sandwiches. 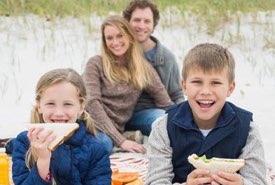