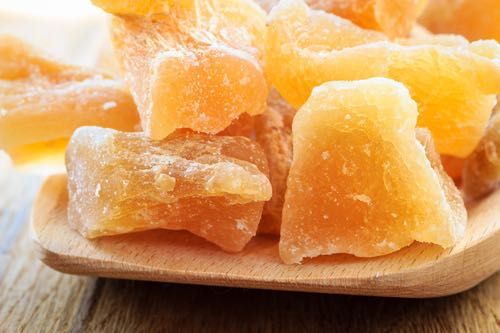 Remove from range and add lemon juice. Turn into pan dipped in cold water, having mixture three-fourths inch in depth.

Muffin pans are a great substitute for the buttered tins called for in old fashioned recipes.

Take 1 cup of water to 1-1/2 cups of sugar, and boil just until when tested it will roll into a small ball. Flavor to taste with essence of ginger or powdered ginger.

Rub some of the syrup against the side of the pan with a wooden spoon until it turns white, then "quickly" pour into buttered tins and put in a cool place.

Here's a short 10-minute YouTube video that not only demonstrates how to make crystallized ginger candy, but shows you how to combine the leftover ginger syrup with club soda to make a refreshing homemade soft drink.

The History of Crystallized Ginger

Ginger has long been a favored flavoring ingredient for confectionery. In seventeenth century England, throughout the reign of the Stuart monarchs, people ate liberal quantities of sweetmeats both for pleasure and for supposed healthiness.

Sweetened medicinal lozenges, many containing ingredients of questionable health benefit, were routinely taken to cure a wide variety of legitimate and doubtful disorders. Ginger was a favored ingredient, as it tended to sooth the stomach and had a pleasing taste.

Around the same time, over in the North American Colonies, sugar was used in homes mainly for medicinal purposes and for sweetening tea. It was seldom used for confectionery purposes.

Oddly enough, candy was to retain its association with medicine up until the middle of the nineteenth century. Ginger lozenges and candies were described as "carminative and stomachic" and "useful in flatulency and loss of appetite."

So, choose an old fashioned crystallized ginger candy recipe and make yourself a treat that's not only delicious but good for you too!