Select an old fashioned Penuche fudge recipe and make a nutty fudge-like candy having a caramel-like flavor and containing either peanuts or walnuts.

Penuche fudge is mostly known in the New England states and in Hawaii, with its likely origins in Portuguese whaling families. It's popularity spread throughout North America. Needless to say, it's wonderfully delicious. 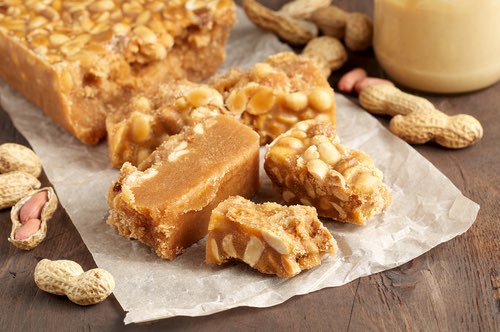 Back in the 1950s, my family made Penuche on the kitchen cook-stove after the evening's farm chores were finished. We took turns stirring the candy until it was ready.

Soon, a plate of warm fudge was set on the kitchen table to nibble on as Dad listened to the radio, Mom knitted, and I read my Roy Rogers comics.

Why not get your family and friends involved in making Penuche Fudge? Enjoy a plateful while playing your favorite board game and experience an old fashioned evening of conversation and fun.

Boil sugar, milk and butter in a saucepan for 15 minutes or until it forms a soft ball in cold water.

Remove from fire and beat until it begins to thicken. Stir in vanilla, nuts and salt. Pour into well-buttered pan to cool. Cut in squares.

Three cups brown sugar, 1 cup cream, 1 teaspoon butter. Boil without stirring until a little dropped in cold water will harden like glass, then take off the stove and stir rapidly.

Flavor with vanilla or any other extract liked. Nuts may be added. Pour on buttered plates and cut in squares when it is hard. —The Farmer's Advocate, circa 1915

3/4 cup milk, 2-1/4 cups brown sugar, 3 tablespoons butter, 3/4 cup shelled walnuts; cook milk, butter, and sugar together until it forms a soft ball that will not stick to the fingers in cold water;

Remove from the fire and add walnuts; beat until it cleaves thickly to the spoon; pour on buttered plates.

Here's a comfort food candy from the past to enjoy. This old fashioned Buttermilk Penuche is so easy to make, and it tastes truly yummy!

This recipe is from a Canadian farm magazine, so you know it's good. You can't fool farm wives!

Boil together 2 cups sugar, 1 cup buttermilk, and butter size of a walnut until it forms a soft ball in water.

Remove from the fire and beat until creamy. Pour into buttered pans and cut in squares when cool. —The Farmer's Advocate, circa 1915

Californian women proudly submitted their best recipes to the Times in hopes of winning the newspaper's Prize Recipe Contests. This old fashioned penuche fudge recipe won in the category for homemade candies.

Cook until it will form a little ball by testing it in a shallow dish of water, then remove from fire, and add the walnuts, and flavor with teaspoonful of vanilla.

Beat mixture until it is creamy and turn out in buttered platter; cut in squares. This is a delicious cream candy fudge. —Hazel Rooklidge