Thanks to Mom's favorite old fashioned coconut candy recipes, you can enjoy the exotic, sweet taste of fresh coconut in a homemade candy.

These candies are easy to make and taste wonderful, mouthwatering, and delicious, just as they did back in Grandma's day.

For instance, the chocolate coconut creams blend the freshness of coconut and richness of chocolate to make a great tasting candy, and you'll want to make the coconut drops and fudge too. 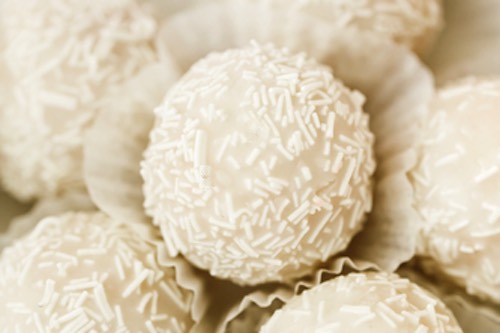 Whenever Mom had pulled one of Grandma's old fashioned coconut candy recipes out of her recipe box, I knew that we were in for a special treat. You will love them too.

Soak gelatin in cold water five minutes. Put sugar and milk in saucepan, bring to boiling-point, and let boil until when tried in cold water a soft ball may be formed.

Warm the butter; mix in the chocolate. When cool dip the creams in, and set on a buttered plate to harden. —Mrs. Edward E. Powers, Recipes Tried and True

Pour on buttered plates, cut in squares. Will take about 2 days to harden. Use prepared coconut when other cannot be had. —Fruit and Candies

Grate the white part of a coconut, the whites of four eggs (well beaten), one-half pound of sifted sugar. Flavor with lemon or rose water. Mix as thick as can be stirred.

Make in balls, putting them about one inch apart on paper on baking tins. Put into a quick oven (425°F); take out when they begin to look yellow. —Mrs. Fisher, Recipes Tried and True

Take one pint of milk, butter about the size of an egg, one coconut grated fine, three pounds of white sugar, and two teaspoonfuls of lemon extract. Boil slowly until stiff, beat to a cream, pour into shallow buttered pans and when set cut into squares.

Whip the whites of five eggs to a very stiff froth and add gradually the whole of one pound of pulverized sugar and one teaspoonful of arrowroot; last, a fresh-grated coconut, or half a pound of desiccated coconut.

Mold the mixture with your hands into small cones (flour your hands); set these far enough apart not to touch one another, upon buttered or waxed paper, in a long baking pan.

Bake in moderate oven (350°F). Be sure to prepare the coconut before you begin; lay the pieces in cold water after paring, until all is grated.

Take one pound of grated coconut, half a pound of confectioners' sugar and the stiff-beaten white of one egg. Work all together and roll in the hands into little balls. Bake on buttered tins (375°F).

No coconut? One-half cup nutmeat, broken in pieces, may be used in place of coconut for this old fashioned coconut candy recipe from the famous Boston Cooking School.

Heat to boiling-point, and boil twelve minutes; remove from fire, add coconut and vanilla, and beat until creamy and mixture begins to sugar slightly around edge of saucepan. Pour at once into a buttered pan, cool slightly, and mark in squares.

Put into a suitable kettle pulverized white sugar, 4 pounds; the beaten whites of 2 eggs, and the milk of 2 coconuts.

Stir together, and place over the fire until you see it is thickening; then, having the coconut meats nicely grated, put in, and watch and stir carefully, till it hardens quickly when dropped into cold water.

Then pour on buttered tins or marble slab. Spread out to thickness desired, and before cold mark off to suit.

Remarks —If done with judgement and care, it is very nice. A gentleman or his wife, in the house where I room at this writing, January 1885, makes a batch of this nearly every evening, and sells it the next day to the school children.

They sometimes cook it till it takes rather a yellow or brown shade, as some of the children like it better than if left entirely white. —Dr. Chase

Dr. Chase was a compulsive collector of reliable remedies and recipes, and through the prodigious sale of his books, his name became identified as that of a family friend in millions of homes worldwide.

My 1891 edition of Dr. Chase's recipe book is stained and well worn because my grandparents often referred to it, and it is also one of my favorites. The Old Doctor's folksy remarks and historical comments always make for delightful reading.