Choose one of Grandma's favorite old fashioned butterscotch candy recipes and make a plateful of homemade butterscotch that's so good tasting, it will melt in your mouth.

This traditional British confection is easy to make, so you can enjoy some tonight. But be sure to make plenty, though, as it tastes so good you'll be tempted to eat more than one piece. 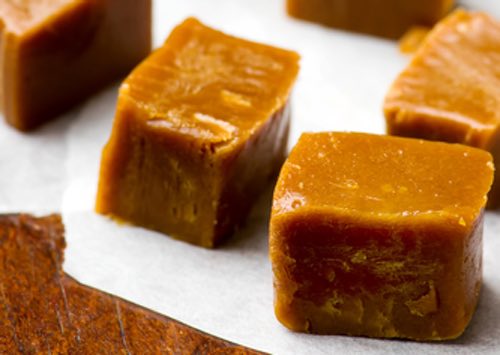 Boil without stirring till it will snap and break. Just before taking from the fire, add a quarter of a teaspoonful of baking soda, pour into well-buttered biscuit tins, a quarter of an inch thick. Mark off into inch squares when partly cold.

Boil one pound and a half of coffee sugar (white, but not granulated), half a cup of sweet butter, half a teaspoonful of cream of tartar, and just enough water to dissolve the sugar. Boil without stirring until it will break easily when dropped into cold water.

When done add one teaspoonful of lemon juice, or ten drops of extract. Pour into well-greased pans, and when almost cold mark into small squares.

Turn into a well-buttered pan; when slightly cool, mark with a sharp-pointed knife in squares. This candy is much improved by cooking a small piece of vanilla bean with other ingredients.

Butterscotch, sometimes written as "Butter Scotch" in the older cookbooks is an Old English confection that had its origin in Doncaster, England.

Samuel Parkinson began making his famous butterscotch candies in 1817, and Parkinson's Butterscotch became one of Doncaster's main attractions until it stopped production in 1977.

We think the "scotch" part of the name is not derived from Scotland at all, but from the word "scorch," as the sugar mixture is heated to the soft crack stage at a high temperature.

Or, maybe even likelier, the "scotch" could be derived from the fact that the candy is traditionally "scotched" or scored and cut into pieces, just before hardening.