Are any of you 50-plusers old enough to remember the old "Happy Gang" radio program that once ran on the CBC? I recently came across a little commemorative booklet for the Happy Gang show that my Mom had sent away for. It was published by its sponsor Colgate-Polmolive-Peet in the late 1940s, towards the end of WWII.

As a youngster growing up on our farm in the late 1940s/early 1950s, I can recall listening to the show every day at lunchtime with my parents. Dad would hurry the chores, and Mom would tune in CBL Toronto and yell out the back door, "Hurry, the Happy Gang is coming on!" Later, in 1951, when I had to enroll in public school, I resisted going because I wouldn't be able to listen to the Happy Gang anymore.

The popular lunchtime variety program ran weekdays throughout the war and postwar period, from 1937 to 1959, for nearly 4900 broadcasts. It was broadcast nationwide on the CBC English radio network, and in its later years was broadcast in the United States by the old Mutual Broadcasting System (MBS) network.

As soon as you heard the familiar introduction:

It's The Happy Gang!

You always knew you were in for a fun time of mirth, mayhem, and music with the cast Bert Pearl, Blain Mathe, Herb May, Bob Farnon, Hugh Bartlett, Eddie Allen, and Kathleen Stokes.

The Happy Gang show's format included short skits and comedy routines by cast members, a variety of classical pieces played by Mathe on the violin, and traditional melodies played by Stokes on the Wurlitzer Organ.

Light songs were sung by Allen or Pearl, and sometimes farcical songs were performed by the entire cast. "There'll Always Be an England" was sung daily throughout the war years, never failing to stir the emotions during those troubled times.

The Happy Gang also made a series of short, five-minute ads promoting the sale of Canadian Victory Bonds to support the war effort.

A popular feature on the Happy Gang show was Hugh Bartlett's "Goon Stories." Gooniest of all, perhaps, is the one about two men on a fishing trip:

Two young men had been fishing all day, and had caught absolutely nothing. Suddenly, one of the men got a tremendous strike; he fought the fish for nearly fifteen minutes, then it got away. So, they decided to row home -- it was getting late. As they were rowing home one of the men said: "Gosh, I hope we can get out tomorrow and get that big fellow." And the second man said: "I sure hope so. Did you mark the spot where we hooked him?" "Yes, I did," said the first. "While you were playing with him, I leaned over the side and put a great big X on the side of the boat, right where your line was." And the other fellow said: "You what! Why you're crazy! How do you know we're going to get the same boat tomorrow!"

It seems that a great maestro was leading a large symphony orchestra, when the dulcet strain of a single violin from the string section reached his ears. The beautiful tones were such as he had never heard before. Turning to see from whence they came, he was struck by the sad expression on the violinist's face. Calling a halt in the rehearsal, the director hurried down to where the musician was sitting.

"My good fellow," he said, "You play so beautifully -- why do you look so sad? Do you have any money troubles?"

"No," replied the violinist, "My car is paid for, and I owe no bills, and I have money in the bank."

"Well, then, are you in poor health? I will get you the finest specialist in the world -- the finest money can buy," spoke the maestro.

"No," replied the violinist, "I've never had a sick day in my life."

"Is it domestic trouble that makes you feel so sad, then?"

"No," replied the man, "I married the most beautiful girl in the world; she's a wonderful cook, and a perfect companion."

Exasperated, the great maestro clenched his fists and shouted, "Well for heaven's sake, what IS it that makes you look so sad?"

The man looked for the first time into the maestro's face, and replied wearily, "I just don't like music, that's all."

Bob Farnon's "Gram Stories" were always funny, especially this one:

This story concerns a little six-year-old girl, Mary. The time is 2 a.m., and Mary is sleeping very restlessly. After tossing and turning in bed for a while, she jumps out and toddles into her mother's room:

Mom: "Hush, darling. Daddy will be in soon and tell us both one."

The Gram Stories were my particular favorite. They were often "Gramatized" or dramatized by the Happy Gang members who added their zany voices.

Besides singing a silly song or two on the broadcasts, Eddie Allan popped in to bug Bert with his gags now and then:

"Ed, something tells me I'm not going to like muffins after this... but go ahead... why"

"A caterpiller is like hot muffins, because it's the kind of grub that makes the butter-fly... Get it?"

"Ed, you'd butter-fly, after those gags!"

The rich Wurlitzer music played by Toronto organist, Kathleen Stokes, a well-known, well-loved Toronto organist of the time, was always memorable. She had played in theatres during the silent movie era and shared one of her experiences in the booklet:

"I was playing the organ with a theatre orchestra one time, and imagine how I felt when a huge rat came out from somewhere inside the console and walked very slowly but deliberately across the keyboard! I didn't dare stop the show by screaming, but I stopped playing. I was too scared to move, anyway. But, adding insult to my already outraged feelings, the orchestra leader was giving me dirty looks for playing wrong notes! He couldn't see -- the rat on the keys!"

Remember, it was dark days of World War II when this tiny Blue Plate Special booklet was published, and it ends with the following words:

"The kids though they were pretty smart -- but they forgot about this spot on the back cover! So...

"We leave just this one thought with you. We have no way of telling what the news of the day will be, on the day that you read this book of ours. We do know that all of us have much to worry and be blue about these days. And the Happy Gang is dedicated to trying to bring at least some cheerfulness, and maybe a little courage, to you every day, just as long as we are able.

"The Gang tries to practice what it preaches, and we really mean it, friends, when we... 'remind everybody, everywhere, above all to remember to KEEP HAPPY, won't you?'"

While looking through some old documents from his grandparent's house, one of my frequent website visitors found something that would excite any fan of The Happy Gang.

Years ago, his grandparents had written to The Happy Gang radio show at the height of its popularity and requested the Gang's autographs. They were so pleased to receive a reply on official Happy Gang stationery signed by Bert Pearl. 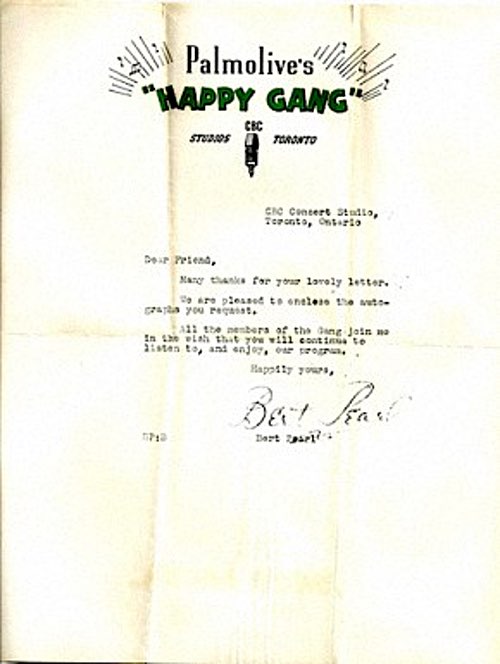 And on a separate sheet were the autographs of all the stars of the show:

The image of the treasured autographs is shared in loving memory of Harvey and Allyene Waring, longtime true fans of The Happy Gang. 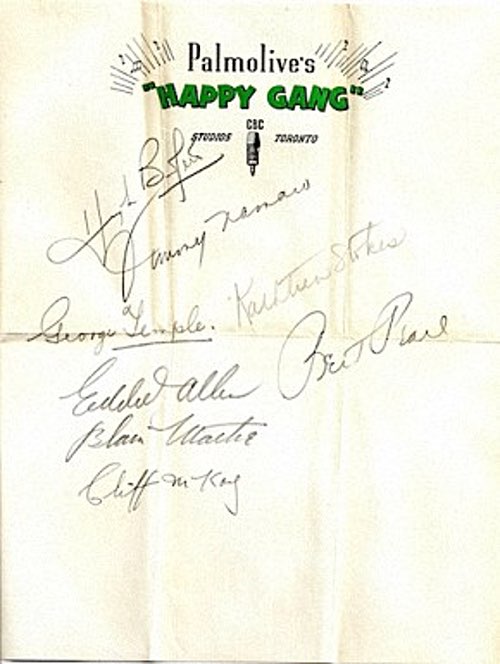 Another visitor to this site came across an old publicity shot of Bert Pearl and The Happy Gang while going through some family photos belonging to her parents. Our thanks to Vicki for this gem of a photo showing the entire cast at the time. 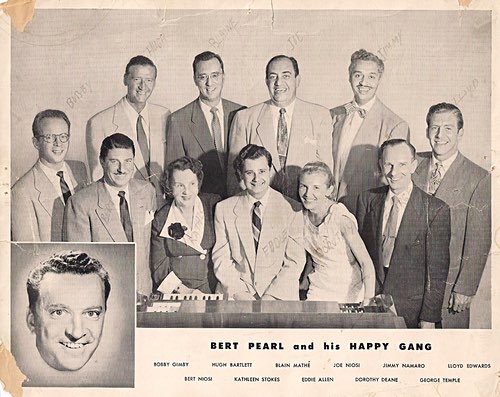 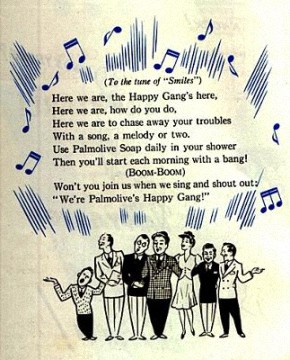 You've given us lots of wonderful memories.

"Keep happy and healthy,
The heck with being wealthy,
So keep happy with the Happy Gang!"