But, what really sets these spectacular dessert cakes apart is their eye-catching appearance when cut — their interiors are an unexpected, blood-red color! 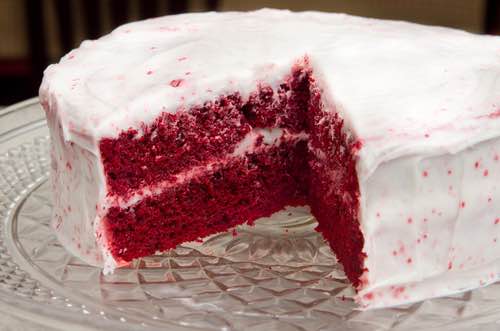 Strangely, while rummaging through Grandma's collection of old fashioned cookbooks, I could not find any mention of a vintage red velvet cake recipe. Not a single one!

I was hoping to include an early recipe in keeping with the historical theme of this site, since only modern red velvet cakes are featured on most food blogs. But, I came up short.

HOWEVER, I did manage to find a recipe for an old fashioned Philadelphia Red Cake that produces a chocolate cake bearing a striking similarity to the famous red velvet cake. Could it be the forerunner of the vintage red velvet cake recipe? Try it and see.

The original 1920 recipe is given below followed by my tips for adapting it to produce a traditional red velvet cake.

How to Make a Red Velvet Cake

The Philadelphia red cake recipe as given above makes a delicious cake, but if you want to adapt it to more closely resemble a vintage red velvet cake recipe, here's what you do:

Just reduce the water called for to 1/2 cup and increase the sour milk or buttermilk to 1 cup, to make a richer batter; and add 1 teaspoon white vinegar and 1 teaspoon salt to the list of ingredients.

Below are some added tips that will help you to create a contemporary red velvet cake. 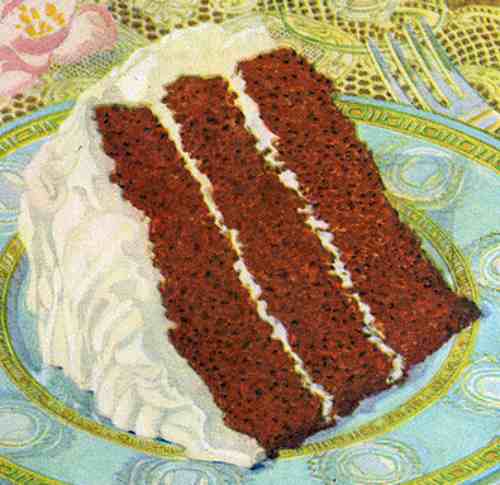 Some food historians believe that historical recipes for Devil's Food Cakes and Philadelphia Red Cakes might have inspired what we know today as the vintage red velvet cake recipe.

I chose some of the best old fashioned devil's food cake recipes and included them below so you can experiment and taste-test the theory.

However, since the distinctive deep-red color cannot be duplicated using today's commercial baking soda and refined coca products, you'll need to resort to adding red food coloring. Try the recipes and see what you think.

Sift flour once, measure the correct amount, add baking powder, and salt, and sift three times. Add sugar gradually to melted butter, and cream together until light and fluffy.

Put favorite white frosting (see frosting recipe below) between layers and top and sides of cake.

Pour hot water over cocoa and soda and stir in last of all. Be careful that water is boiling. Flavor with vanilla. Bake layers in moderate oven (350°F).

Combine egg white, sugar, salt, water, and corn syrup in top of double boiler. Beat about 1 minute, or until blended.

Cook over rapidly boiling water, beating constantly for about 4 minutes, or until frosting will stand in stiff peaks.

Remove from boiling water. Add Vanilla flavoring and beat for 1 minute, or until frosting is thick enough to spread on cake.

The true history of red velvet cakes remains unknown, but this unusual cake has long been a favorite in the American South.

A popular urban legend links its origin to New York's famous Waldorf-Astoria Hotel, but it cannot be substantiated, and the hotel persistently denies the alleged connection.

It's said that a chemical reaction between the old-style baking sodas and processed coca powders sometimes gave the cake batter a distinctively reddish tinge.

Apparently, some cooks enhanced and encouraged this phenomenon by adding a generous amount of cochineal (red) food coloring.

Enjoy experimenting with the devil's food cakes that might have inspired the invention of the vintage red velvet cake recipe.

One thing that IS known, everybody loves these chocolatey red dessert cakes. They are most popular for serving on special occasions such as birthdays and anniversaries.