Coconuts have been available to cooks for centuries as they were easy to transport and inexpensive to buy. For many people living in remote rural areas, coconuts added a taste of the exotic to an often mundane life.

You'll enjoy the delicious flavors of these homemade dessert pies, especially when the coconut is freshly grated. 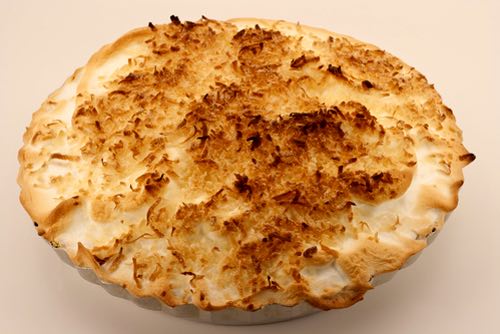 Pour a little into a baked crust, alternating a thin layer of custard, then 1 layer of grated coconut, until crust is filled; cover with meringue and brown at 350°F. —Dorothy Mae Griffith

One-half cup desiccated coconut soaked in one cupful of milk, two eggs, one small cupful of sugar, butter the size of an egg. This is for one small-sized pie. Nice when served with a meringue on top.

Cut off the brown part of the coconut meat, grate the white part, and mix it with the milk, and set it on the fire and let it boil slowly eight or ten minutes.

To a pound of the grated coconut allow a quart of milk, eight eggs, four tablespoonfuls of white sugar, a glass of wine, a small cracker pounded fine, two spoonfuls of melted butter, and half a nutmeg.

The eggs and sugar should be beaten together to a froth, then the wine stirred in. Put them into the milk and coconut, which should be first allowed to get quite cool; add the cracker and nutmeg, turn the whole into deep pie plates with a lining and rim of puff paste. Bake them as soon as turned into the plates (350°F).

Grate up a coconut, reserving the coconut milk. Then, line a pie plate with rich puff paste.

Rub a quarter of a pound of butter to a cream, add half a pound of powdered sugar and the beaten yolks of four eggs, the grated peel of a lemon, a wineglassful of brandy, and the milk of the coconut, and then add the grated coconut to this mixture. This will make two pies. Bake in open shells at 350°F.

Now make a meringue of the egg whites with pulverized sugar and spread on top and brown in oven.

The thought of obtaining coconut fresh from the shell might seem difficult and time-consuming, but opening a coconut is EASY once you know the secret of how to open coconut shells instantly.

Everyone should have the fun of splitting open a coconut and preparing the coconut meat from scratch. It tastes so delicious when it's fresh, and it's a novel and fun experience for children.

The grated coconut meat is so much fresher than the prepared store-bought kind. Its taste is wonderful!

True, you can substitute store-bought coconut in the recipes, but why not open a coconut and experience the fresh, moist flavor difference?