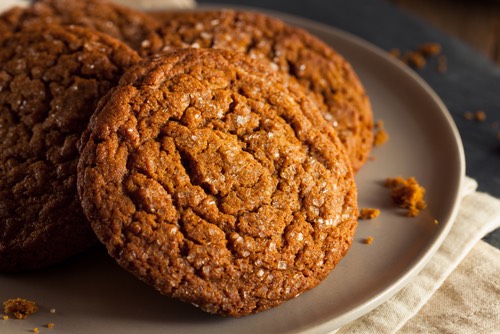 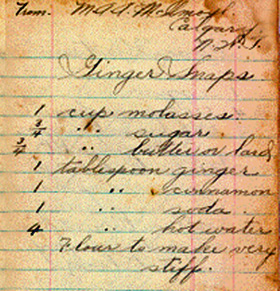 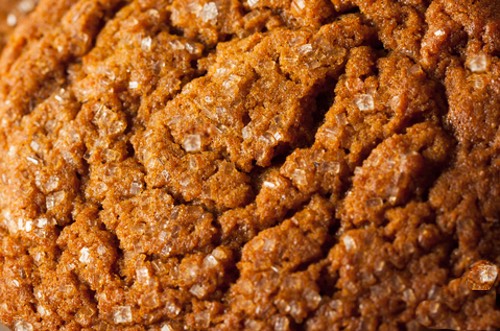 Beat until mixed, then shape into balls. Dip in white granulated sugar and flatten. Bake at 350°F until judged to be done.

This old fashioned ginger cookie recipe features organic, home-grown honey and was prepared in the 1920s by the food specialists at Macdonald Institute, O.A.C., Guelph, for the farmers of Ontario. So, you know they must be good!

These are indeed SNAPS, the thinner the snappier! They are also the makings of gingerbread men, animals, and any other bit of whimsy you want to cut and bake. And so easy!

Heat 1/2 cup of dark molasses till it boils. Meantime, in a teacup dissolve 1/2 teaspoon of baking soda in three tablespoons of hot water and set aside.

Mix together (so the spices won't lump) 3 tablespoons of sugar with 2/3 teaspoon of powdered ginger and 1/3 teaspoon of cinnamon. Cut 1/3 cup of butter into the sugar mix, pour the hot molasses over it, and stir till butter and sugar melt. Add the hot soda water (and don't be astonished if it foams). Then gradually stir in 2 cups of flour. This gives you a nice firm dough which, when chilled, is easy to roll.

Cover it well and place in the icebox for a couple of hours. When you're ready to roll the dough, dust the board, and the rolling pin with as little flour as possible to prevent sticking — or spread waxed paper on the rolling surface and also wrap it around the rolling pin.

Cut with biscuit cutters or cookie cutters — or trace the outline with a knife, put into oven (preheated to 350°F), and bake for 10 minutes.

When you get expert, the cookies will be so thin you can almost see through them, and so crisp they practically disappear at the first chew.

This recipe makes between 50 and 75 snaps, depending on size. —Calling All Girls Magazine, January 1945

Somebody wanted a ginger snap recipe that would stay hard, and not get soft. Use one cup of butter, 1 cup of lard, 1 cup of brown sugar, 1 pint of molasses, 1 tablespoonful of ginger, 1 cup of sour milk, 2 teaspoonfuls of soda, 1 pint of flour — use more flour, if needed.

Melt lard and butter together, stir in the ginger, sugar, and molasses; dissolve the soda in the milk; stir all together, put in the flour, roll out thin, cut and bake in a quick oven.

Remarks. —If made sufficiently stiff, properly baked, allowed to get cold, then kept from the air, they will keep hard a very long time.

Remove from the fire, and allow to cool. In the meantime, sift four cupfuls of flour, and when the above mixture has cooled, stir into it about half the flour. Dissolve a teaspoonful of soda in a tablespoonful of warm water, and beat into the mixture.

Stir in the remainder of the flour, making the dough stiff enough to roll into half-inch pieces, and place on well buttered tins, leaving plenty of room to spread.

Bake in a moderate oven and let the cookies cool before taking them from the tins. —Mary E. Underwood, Illinois. 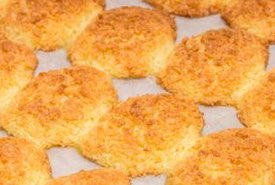 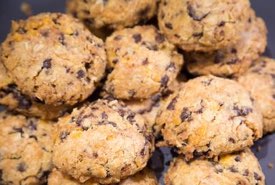 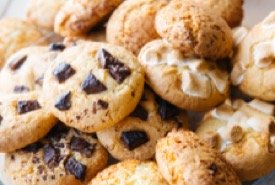