When the Circus Came to Town While rummaging around in my basement the other day, I came across my old "King Bros. - Cristiani Circus Magazine" containing the official program for the King Bros. & Cristiani Combined Circus: Season 1953 -- 34th Annual Tour. Seeing it brought back many happy memories of the circus, and I thought I'd share a few with you.


Elephants and the Circus Train

Curiously, my first recollections of visiting a circus are not of the clowns or the daring aerialists, but of the elephants. It must have been around 1950, but I can't be sure as I was only about four at the time. I can only remember the elephants after the day's performances had ended. They were harnessed and busy helping with the lowering of the big top and hauling the massive tent poles to the wagons.

A steam calliope played its distinctive brassy melodies in the background until it was drained of its water and hauled away by a tractor for loading on the circus train. We followed it from the sidewalk, and in the growing darkness I can recall seeing the large circus train parked along two railroad sidings three or four blocks from the exhibition grounds.

Mom and Dad and I waited beside the rail cars with my aunt and uncle to see the elephants when they returned from their duties. It seemed a long time waiting in the darkness, but eventually we heard a soft swoosh, swoosh sound and suddenly the lead elephant loomed directly behind us in the moonlight causing us to quickly move out of its way. It was unbelievable how quiet the elephants had been in their approach.

We stood quietly by and watched as more than a dozen large elephants walked silently past us in single file, each holding the tail of the elephant in front, till they reached the elephant cars and ascended the ramps to bed down for the night and embark on the next leg of their tour. It was a sight that I've never forgotten, and it obviously made a huge impression on me, as I can remember little else about that evening.

My next recollection of a circus is when the King Bros. & Cristiani Combined Circus of Macon, Georgia visited Peterborough, Ontario, on their tour through Ontario in June 1953, the year of the Queen's Coronation.

My parents and I went to the evening performance, and I can recall watching the breathtaking trapeze acts, the acrobats, the jugglers, and the numerous trained animals including the renowned Cristiani elephants. 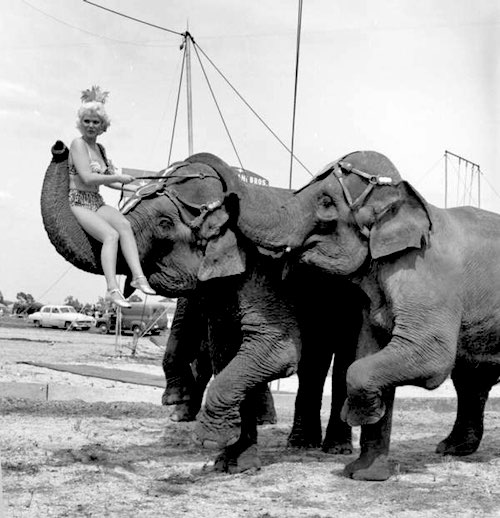 To a seven-year-old, the clowns, of course, were looked forward to, and they did not disappoint. Here's how their acts were described in the program (pictured above):

"Display No. 5: The clowns take over the rings and the Hippodrome Track to display their newest invention -- The Atom Smasher."

"Display No. 8: Here it comes -- that mysterious vehicle -- the clown car, which disgorges so many humans at one time that you will lose count of them as they emerge. Watch the finish!"

"Display No. 14: The clowns rock the tent with individual bits of merriment as they surround the Hippodrome Tracks with their fun provoking gags."

"Display No. 17: The clowns again -- this time with their reproduction of the "Man Who is Shot from the Cannon." Hold your ears!"

"Display No. 21: Final appearance of the clowns -- one last guffaw -- one last hilarious moment -- before they wave goodbye for another year."

The star attraction of the evening's show was seeing a man billed as The Human Cannonball shot from the mouth of a giant cannon, from one end of the Big Top to the other, and landing in a large net.

The loud "BOOM!" from the cannon caused us all to jump in our seats, and it was immediately followed by loud roar of approval from the crowd. The program states this most dangerous feat was performed by "The One and Only Original, Hugo Zacchinni."

Instead of arriving by circus train, the King Bros. & Cristiani Combined Circus arrived in a convoy of over 40 vehicles, but it maintained the aura of a traditional circus with its three rings under the huge canvas Big Top, and it even featured a steam calliope.


Now Only a Memory

Sadly, the circuses of the early 1950s are now only a memory. However, if you'd like to get a feel for what those old-time circuses were like, rent or buy a copy of Cecil B. DeMille's "The Greatest Show on Earth." It's one of the best movies ever made.

The movie showcases the Ringling Bros. and Barnum & Bailey Circus at the peak of its fame and popularity with its 1,400 performers and workers, hundreds of trained animals, tons canvas and equipment, and an impressive 60-car circus train. Parts are filmed in a documentary-like style that offers a good behind-the-scenes look at a busy circus of that day.

For a look behind the canvas of the big top, you'll want to get your copy of Victoria B. Cristiani Rossi's wonderful book "Spangles, Elephants, Violets & Me: The Circus Inside Out" and enjoy a firsthand account of what it was like to live and travel with a world-famous, old fashioned circus.

A quick search at AbeBooks.com should locate a copy. Believe me, this book will bring back many fond memories.

Be sure to read Victoria Cristiani's comments below.